Nowadays, Agile has become the most commonly used methodology in software development life cycle, which promotes continuous iteration of development and testing concurrently, unlike the Waterfall model.

It has pre-defined short iteration cycles for 2-3 weeks to deliver quality product. QA teams have to work with developers and vice versa to achieve the goal of BVT.

In the DevOps model, use of a BVT methodology is an essential step in continuous integration maturity.

In this whole cycle, BVT has an important role in terms of delivering a high quality product on time. In BVT, QA teams run a set of pre-defined test cases on each new build to ensure that they are a stable build for further testing.

You can see the below highlighted area, which falls under BVT. 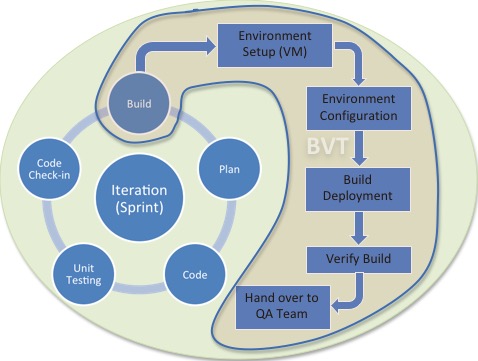 The entire cycle takes at least 3-4 days, which depends on product complexity that requires handing over the product to QA team for further testing. And this would happen at the end of each iteration i.e. after each 2-3 weeks.

Now think about it, how does it feel when you can automate the whole thing?

Amazing, right? Yes, if we can automate whole BVT process it can easily save around 3-4 man-days on each iteration. Also, these automated processes are more reliable, and without manual errors.

BVT is a surefire mechanism to ensure no regression defects have been introduced in DevOps methodology.

But the bigger question is how? What would this approach look like?

Please see the steps below.

First step is to setup Bamboo or Jenkins, in such a way that nightly test builds would be started at the end of every sprint OR manually, which pulls the latest code from the GIT/SVN, executes unit test cases, generates build and uploads that build on Artifactory.

Once build is uploaded, it will kick-off automated BVT plan. Let’s dig into more detail in each step of BVT process.

There are multiple options to generate VMs automatically:

Each one of the options have their own Rest API to clone VMs from pre-defined VM templates. These pre-defined VMs have the required software already installed. We can call upon these APIs using Python, Java OR even shell script, whatever is applicable.

For example, in Weblogic server, you have to answer to all the questions requested during the installation process and run the command “weblogic.exe -mode=silent -silent_xml=path_to_silent.xml”

To automate this step, Ansible is a really good option.

Get the latest build from the Artifactory and deploy it on Web application server using Ansible. Once build is deployed on server, one has to make sure that it is successfully deployed to access a web page.

Once build is deployed successfully, start executing pre-defined test cases, which cover the core functionality of the product. You can automate those test cases based on your requirement using any language and tool like, Java, Python, shell script, selenium etc.

It is really a good idea to add test step results into Jira directly from Test script, so that there are no manual interventions or dependencies.

There is a Zephyr plugin for Jira to achieve this. Zephyr exposes rest API, ZAPI, to add/update/delete test case/step result in Jira directly. You can use that ZAPI and develop script based on your requirement and add result into Jira during test case execution.

This is an important step where one has to inform the manual QA team that the build is stable/not stable for further testing. This is done using a final status email.

This is just a general approach to automate build verification testing process in Agile.

We have collected quantifiable data from multiple low/average size projects, and based on that, we realize that it is possible to save 88% of efforts from manual BVT using automated BVT.

Because of automated BVT, one can save a number of man-hours, which can then be utilized for productive work, even while managing the project within the planned timelines.

To know more about how eInfochips can help your organization achieve to BVT in your QA practice, drop us an email at letusconnect@einfochips.com You may also want to check out our unified automation solution – EzTest.

Want to Achieve BVT in Your QA Practices?

Contact our experts to get help with QA best practices.

Dhaval Patel is Technical Manager at eInfochips looking after of DevOps and Automation in the PES department. He has a background in designing and development of automation frameworks for Rest-API, Web-Based and Mobile Applications based on various technologies. Furthermore, he has developed automation framework using Python, Robotium and Shell script to automate BVT (Build verification testing) and End-to-end functional test cases in Home security and automation domain. Dhaval has over 12 years of experience in Development and Automation projects across various domains such as Home Security & Automation, Collaborative System, Security - Surveillance and Consumer Electronics. He has a B.E. in Computer Engineering from Nirma Institute of Technology.

Shaping up Analytics for the Smarter Grid 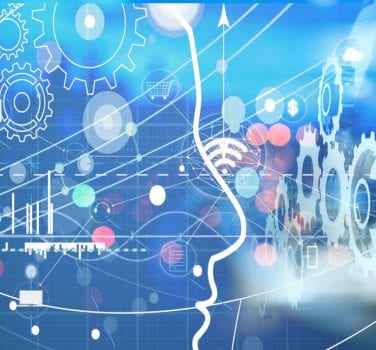